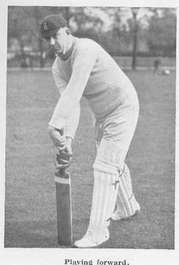 END of research by Mr B Linnnel of the Tewkesbury Register.
NOTE:  The season up to the 1920’s was from late June until mid September. 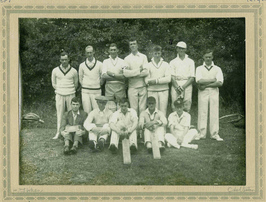 SECTION B:    JACK FLUCK REMEMBERS
The following was a written historical note by Mr Jack Fluck at Brian Leeke’s request in the mid 1980’s:

Apperley Cricket Club.  As we search though the records to obtain a history of the Club, it is remarkable that there is no press reference until 1892.  But from 1859 and for the next forty years various Club names are found – the earliest is in 1859 when a Deerhurst X1 played Severn Stoke.  Included are names from all sections of the Parish. The next year we read of Deerhurst & Tewkesbury Cricket club and matches were played on ‘Lodge Ground’ in Tewkesbury Park. The following year the name changed to Tewkesbury & Deerhurst CC. Again in 1869 we find three teams, Tewkesbury, Deerhurst and Tewkesbury Park. We then find a fixture with Tirley in 1892.
The first mention of Apperley CC’s full fixture list is in 1893.  In 1896 we find Mr Gillett the captain of the side with W Dipper as a player.
From 1901 only a few matches played and they were often against schools – Grammar School.
From 1915 – 1920 there was no cricket as the nation was at war, World War 1.
From 1921 a full fixture list was arranged with such well known names as Harry Clifford, Bill Jones, Len Bartlett, Joe Dunn, & Tim Robinson the backbone of the side until World War 2.
Apperley Cricket Club Supporters Club raised £9 by arranging a concert in the Village Hall.

It is obvious that the germ of cricket was brought to Apperley by the Strickland family when they arrived from Yorkshire in the 1830’s.  Several Stricklands are named as players, they provided the ground and built the first pavilion which was destroyed when an elm tree fell on it.  They also provided teas for the players and visitors.  When help was need the family always responded.
No club could survive without good management and it was the work put in by the secretaries which built up the good name of the Club.  From 1896 to 1955 the various headmasters of Deerhurst C of E Primary School carried this task, Mr Gillett, Jack Stock, Alfred King and Jack Fluck (1933 – 1955).

The early teams in the 1870’s, 80’s & 90’s carry the names of the then residents of the Parish and between 1920 and 1950 no one living outside the Parish would be considered to play for the Club.  The only exception to this was during the war when most local teams folded up – but by using players like Tiny Bourton and Pat Williams we were able to carry on.  With the increase in transport in the 1930’s we played away at Frome Hall Park, Stroud (home of Stroud RFC), Cam, and a day game at Weston-super-Mare.

One of the characters of the Club between 1920 – 1946 was Mr Copp who was a stud groom at Apperley Court for more than 40 years.  Starting as a player he later became the Club Umpire for many years.  Each autumn a dinner was held at the Village Hall and the chief ingredients were a leg of lamb and a leg of pork (cooked by Mrs Jones) and a nine gallon barrel of ale.  Mr Copp was the chief carver and afterwards we had a concert of our own making – always started by Mr Copp’s rendering of ‘See me dance the Polka’
Another important character was Mr George Andrews, a basket maker, who lived in Gabb Lane (next door to Sabrina Cottage). He was the Club Scorer for many years and his writing and figures could not have been equalled at Lords or the Oval.  He always had a rose or sweet pea in his button hole.  Such men made village cricket.
The fee for players was always 2/6 (12.5p) and with a whist drive and a dance on New Year’s Eve, we could always balance the books.
The family of Dipper lived at Green Farm until about 1929.  Both father and son played for Apperley.  The last of the family died in Apperley in 1956.
The outstanding player between the wars was Bill Jones who could bat, bowl and was a first class slip.  He scored a century for his unit in 1917 at Ualta.  Losses to the Club were the deaths in 1915 of Mr Green at KUT and Ronnie Bartlett in 1942 in Burma.
In the last few years the team with an excellent pitch, a new pavilion and a blending of players has now achieved an established place in country cricket in Gloucestershire.

Every village club needs its heroes, the unsung ones who work uncomplainingly or sometimes complainingly, the ones who do all the hard graft so others can play cricket on the weekend at one of the most well appointed and best village grounds in the area. Apperley is a village club through and through as in keeping with the history of the club that you have read beforehand. This section allows us an opportunity to give a proverbial round of applause to those who have done so much for the club.

Above all, there are two heroes … Brian "Rakey" Leeke and Norman "Norm" MacPherson. The focused businessman and the laid back builder who have known each other and played cricket with each other for over 40 years (Norm occasionally used to miss a match for the races! - don’t believe everything you are told!) There are plenty who have given plenty and they are not to be forgotten, especially the driven Len Attard who did the ground for many years and was at the helm for Apperley’s halcyon days on the playing field en-route to Lords & was also Chairman, John "Fez" Davison  (a long time secretary and player) & Guy Van de Gucht (who leases the land at a reasonable rate and also played). There are many to mention and the “real” club members know who they are. A small thanks on a web-site does not count for much, but thanks to the boys of ’76. The Boulton brothers, the Hale brothers, Martin Mayo, Ben Weston, Sooty & the above.

If the club is still going in 100 years they must acknowledge their debt to Rakey/ Gandalf/ Brian Leeke & the Silver Fox/ Stormin’ Normin or just plain Mac. Everybody leaves their footprints in the sandhills of history: these are mighty big footsteps for people to follow. As they say about people who contribute above and beyond the call of duty … “less we forget...” Therefore, perhaps ceremonially at the unveiling of the new pavilion the two ends of the ground should be renamed from the Church and Chapel End to the MacPherson & Leeke end. A small tribute for the huge effort they put into the club and for their wives who put up with them!!

If you look at the photo of the 1978 crew (picture still to be scanned) you will see the young faces of men with a dream. It would be nice to say 20 years on that dream came true when Apperley played at Lords but I doubt that any dared dream that particular dream. The dream was to have a cricket club that their children could play for & which they could be proud of and have fun at: the young Leekes were 10 & 8, the young MacPhersons were 7,5 & 3. The young Sam Wheeler was not even a sparkle in Sooty’s eye at the time! The names of Leeke, Macpherson and Wheeler can now be seen again in 2004. Their young faces smiling with a dream of a village club, probably the best in the county, realised.

Some of those who were there at the beginning are no longer with us, like Nigel Tarling, but the sprit of 76, the long hot summer when Viv Richards and Michael Holding destroyed England, lives on. Lords was without doubt Apperley’s finest hour. Some of the stories from that trip should never be committed down to paper or the internet, let them pass down the generations … sorry, what happened at Lords stays at Lords!!!!

If the marketing slogan of “ … more than a cricket club” is going to be true the next generation of Rakey, Norm & Lens have their work cut out. Who will be new heroes of the club? Well, time to stand up to be counted time for many who read this piece. The honours below show the club has been a success on the field, but it is the wider picture of what a club represents is what truly matters.


Some International Players who have played at Apperley Cricket Club: